The VENTURE BROTHERS are dead to me. 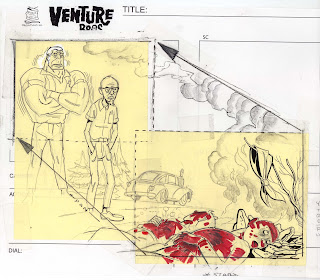 Many thanks to crack cartoonist Douglas Lovelace for supplying this piece of my art, which I'd hinted at a couple of weeks ago during the Big Venture post.
Permanent red marker. See all the blood?
The boys are dead.
Posted by sdestefano at 8:09 AM 7 comments: 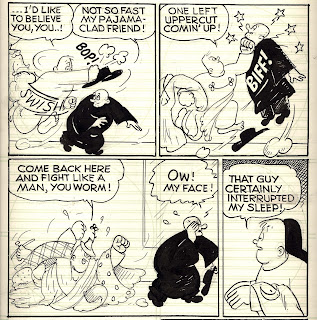 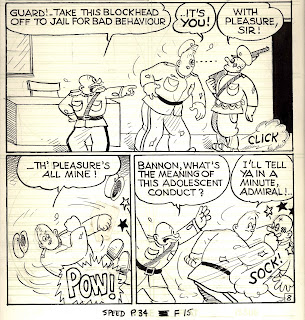 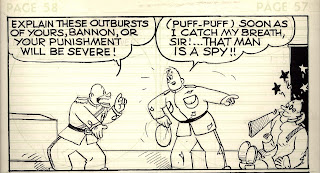 One of the best buys I got out of a Heritage auction, 9 pages of originals by Art Helfant.
I adore this art. In my mind's eye, this is how I'd like to draw, ideally.
It's simple, direct, no nonsense, and gives you every bit of information you need about the story.
Look at how much negative space he supplies around his characters, and how well they read because of it.
This is 'black-spotting' at its simplest, and most effective. The bad guy is in black. And that's practically all the black Helfant spots.
Look at how BIG the lettering is!
Jesus, the clarity.
Posted by sdestefano at 8:02 AM No comments: 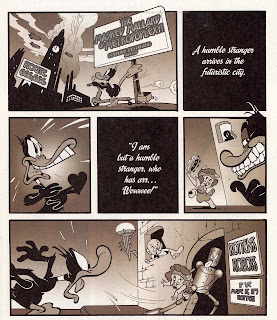 Just received my package of complimentary copies in the mail yesterday, which means it's either on the stands, or about to hit this coming week.
With a script by Joey Cavalieri, and art by me, Neal Sternecky, Pete Bagge, Bob Fingerman and a few others.
Many thanks to Uncle Phil Rynda for his help on this story!
Posted by sdestefano at 7:58 AM 5 comments: 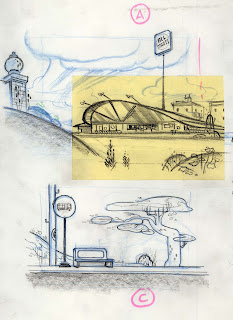 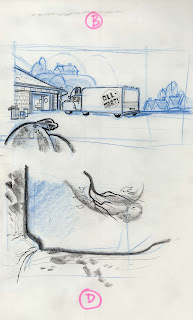 I was trying to incorporate everything I'd learned about BG Design on Ren and Stimpy into the never produced KATB*T show, but with an eye towards creating something relatively new. I was conscious that I wanted to vear away from the 1950's "UPA" style that's so prevalent in animation today.
Posted by sdestefano at 11:08 AM 10 comments: 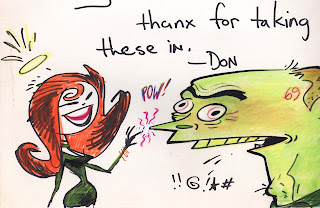 Just saw that YAHOO MOVIES has me credited as "visual development" artist on the Disney short, RUNAWAY BRAIN, but has incorrectly spelled my name as "Stephen Destephano'.

POPEYE (and drawn by someone other than me!) 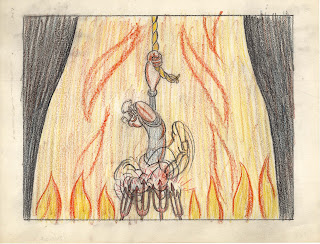 Nice, right?
I don't know who drew this, nor which cartoon it's from (I could probably track it down from the war era of early Famous Studios shorts--or one of my astute fellow bloggers is welcome to chime in if they have the answer). But there you have it, a storyboard drawing from a Popeye Cartoon. This was a gift (an extremely generous one, to boot) from John Loter, many years ago.
Most of you know by now that the classic Fleischer Popeye cartoons will begin being released on DVD sometime this summer---check CARTOON BREW for the date. I had a very minor hand in the production of this historic set. The cover artwork is indeed all mine, albeit from King Features Style Guides of years past, and it is a handsome package King had put together. I also (did I blog about this before?) was filmed drawing the character, and mouthing off somewhat dully about my love for Popeye, which will be available on the DVD in the extra features section. Wahoo!
Also, in further Popeye/DeStefano news, I just completed an interview with Brian Morris about my life drawing the Sailor Man for licensing, to be printed in HOGANS ALLEY sometime in the near future.
Posted by sdestefano at 2:22 PM 1 comment: 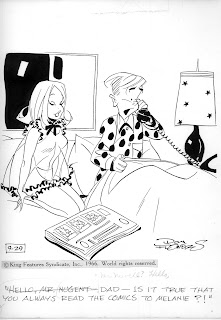 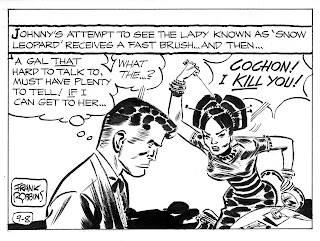 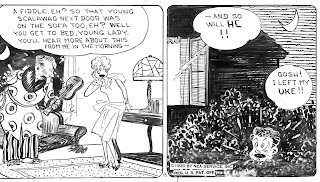 As Bob had suggested, I do have a pretty sweet collection of orignal art from the classic era of newspaper comics. No Herriman or McCays in it---what am I, a millionaire?---but definitely some nice stuff, which I can begin sharing with you.
The first shown here was a gift from Shane Glines, a nice Don Flowers original.
The second a gift from Bill Wray. Frank Robbins was just the best, wasn't he?
The third is a couple of panels from my most recent acquisition, a MOM AND POP daily. Not so incredibly pretty, but charming and straightforward, which I love.
Posted by sdestefano at 2:15 PM 1 comment:

Actually, two separate drawings I've scanned together.
Still, this is for Andy.
I was a pretty weird kid. When playing with my action figures (Megos! Mattel's Big Jim! Bullet Man the Human Bullet!), I'd pretend my heroes were shooting the shit, discussing minutea of the day, as often as I'd have them throw down.
It outraged my older brother.
Posted by sdestefano at 1:47 PM 3 comments:

Kids--Y'know, check back with me here on Sunday. Folks've come through with some good suggestions of what they'd like to see on my blog, and I'll have some free time then to post!
Posted by sdestefano at 7:50 PM 2 comments:

Friends,
a little too busy this week to post anything new, but I have updated my links section, and plan to add more links in the coming weeks.
I'd love to hear if there's anything folks'd like to see me post.
More Popeye? More VB's?
I think I have some Mickey Mouse art I could put up.
Also, some work from my time on Universal's last incarnation of Woody Woodpecker.
Give a shout, if anyone has ideas.
best,
Sde
Posted by sdestefano at 7:33 PM 7 comments: 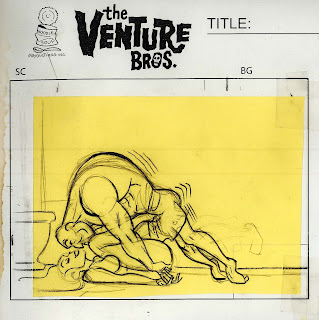 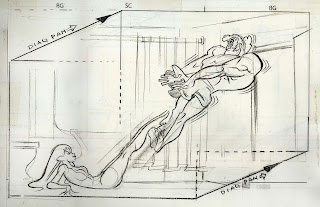 I've been wanting to do this for a while.
Many of my friends have posted their wares from their time on the VENTURE BROTHERS. I was a board artist on Season One, under the crazy brilliant storyboard supervision of Bill Presing, and the even (if you can believe it) crazier brilliant direction of the one and only Jackson Publick.
About three weeks ago, I returned to Venture, this time as storyboard (and character design) supervisor myself, for Season Three. I am home. I share a swank, swinging crimson red painted office with Mr. Publick himself (he's actually blogged about it, just check on the links to the left of this post and you can read for yourself), recently adorned with busts of Giant Man, the Wasp, Goliath and Electro. I've read two scripts for the coming season. I've been promised that I will be killed-- violently-- if I devulge anything from those scripts, but I think I'm safe in saying they're hilarious.
On Season One, I boarded the first appearance of Molotov Cocktease, and her vicious fight with Brock.
I also boarded the sequence featuring Brock's massive, erect dong.
I was good at sequences featuring massive dongs and intimate, violent fights.
Not so good at army invasions, though.
Mr. Publick's infatuated with army invasions, and when reading new scripts during season one, I'd scour them for army invasions. Then I'd tell Bill I refused to draw that sequence, and he'd have to give it to my boarding partner, Tom Connor. Which he'd do.
Thankfully, I've a staff starting in a couple of weeks, and I can let them worry about future army invasions.
Posted by sdestefano at 8:09 PM 4 comments:

The Big Venture Post, Part 2: SOMEBODY LOVES THE MONARCH! 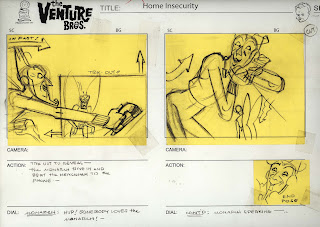 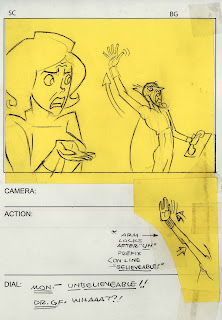 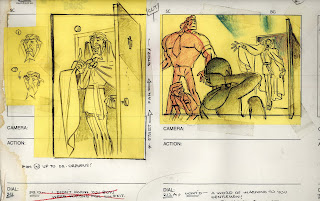 It's me, I love the Monarch. The second best character to board on the show. Right after Orpheus and before Doc. I can get nearly as cartoony as I'd like with the Monarch, and luxuriate in the most diabolical acting my pencil can muster. Of course, Orpheus has killer lines too, and I've posted a couple of drawings from the sequence where he emerges from a Men's Room, instructing the Ventures to wait a few moments before they enter, as he'd had "Taco Bell for lunch".
Posted by sdestefano at 8:03 PM 2 comments: 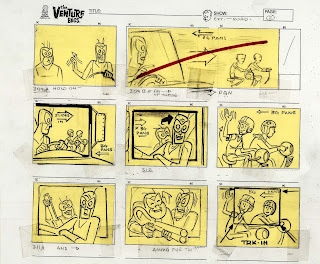 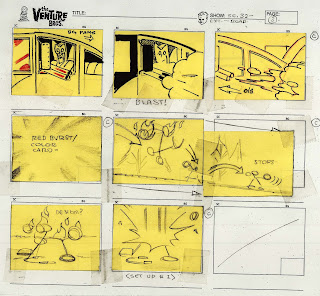 One of the sequences in Season One that I'm most proud of boarding was the EASY RIDER scene in the season finale.
I boarded all the way through to the end sequence when Doc instructs Brock to "get the boys clothes".
Only my original drawing for that bit was a lot more graphic, and bloody (I used a lot of permanent red marker), showing the VB's face front dead. I mean just--dead. Freaking dead, violently; it was beautiful.And I don't know where that drawing is anymore, gosh ding it.
Posted by sdestefano at 7:56 PM 1 comment: 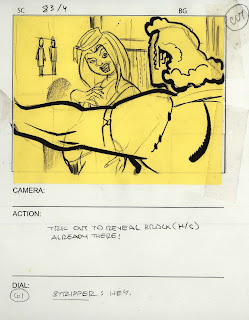 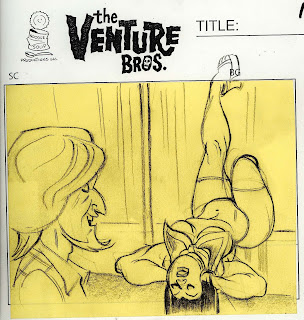 I was the fellow that got the task to board all of the stripper sequences in Season Ones "MIDLIFE CHRYSALIS".
It was fun.
Posted by sdestefano at 7:53 PM 1 comment: 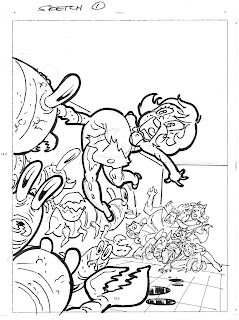 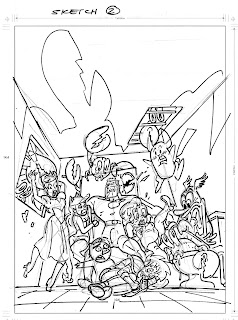 Some of you may know that I was boarding on Drawn Together last year, which was a good gig. Very difficult, it's a very work intensive show, but actually quite a lot of fun. My old REN AND STIMPY office mate, Pete Avanzino was supervising director on the series, and Pete invited me onto their team, in a freelance capactiy. Actually, everyone at the producing studio, Rough Draft, was as nice and as generous as could be with me, from Producer Claudia Katz on down to directors Dwayne Hill and Stephen Sandoval, among others.
These drawings were intended for an ad in Variety Magazine, that to my knowlege never got farther than the sketch stage.
Posted by sdestefano at 7:46 PM 2 comments: 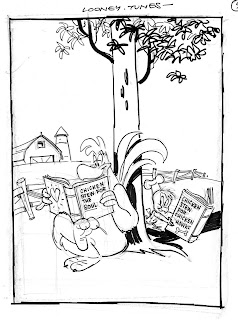 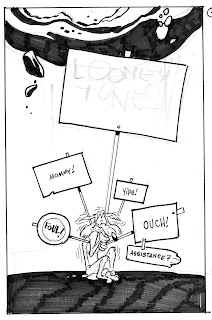 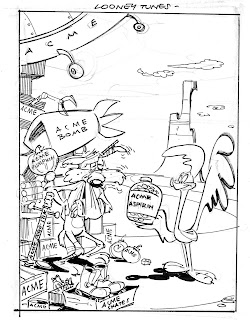 Pitched these a few years ago to DC comics, but the Looney Tunes editor wasn't interested. I still like 'em; the gags are a little lame, but no lamer than what's generally used.
Posted by sdestefano at 7:42 PM 3 comments: