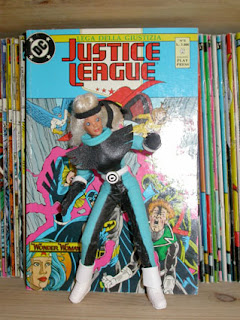 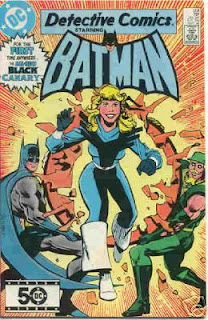 It was me. I was the one who redesigned Black Canary's costume in the mid-eighties. I did away with the fishnet stockings. I gave her the godawful headband and the cowl neck. I'm not proud of it. But you've got to understand--this was Post-CRISIS ON INFINITE EARTHS DC. Everything was going to be new, and whatever wasn't new, would soon have to be. Or so it seemed. I was still a teenager back then, lurking the halls of DC, trying to get my first regular series, 'MAZING MAN off the ground. And I originally got my job at DC by designing characters. Len Wein said that Black Canary was going to have to be redesigned anyhow. And I didn't see why, because I always thought her costume was so nifty. But, I figured, hell, if it HAS to be redesigned, let me be the one to do it. My original sketch was different, all grey and black, no blue. No headband, but a feathered head piece. Bad ass feathered head piece, not a pansy one. Len and Marv Wolfman asked me to change it. And then they bought it. And then Brian Bolland burned it. 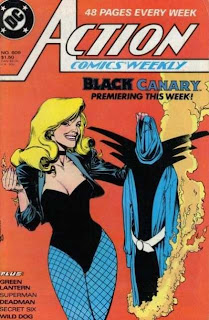 Also around that time, I redesigned Elongated Man. This one seems to have faired a little better with the fans as well as the pros. Brian Bolland never burned this costume. Carmine Infantino drew it once or twice. Bruce Timm and his designers and producers even used it for their JUSTICE LEAGUE series (surprise Bruce! I work for you even when you don't know I work for you!). It's even been used on Mattel toys. I'm kind of proud of that. I should get money for that. 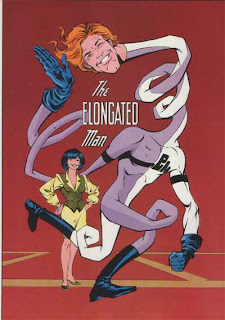 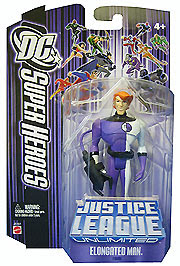 Sometime, remind me to tell you the story of how I redesigned the FLASH for Len and Marv.
An all new Flash, not a speedster, but like a laser-guy, for the Post-Crisis Universe. It never got off the ground.
Posted by sdestefano at 8:30 PM 12 comments:

TOM BAYNE IS A GENIUS

VENTURE BROTHERS film editor Tom Bayne is a genius. Check out this kookie film he created in a weekend while he was a student at SVA. It slays me.
Posted by sdestefano at 7:18 AM No comments:

POLLY AND HER PALS DAILY 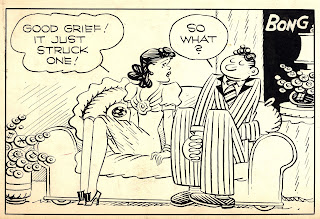 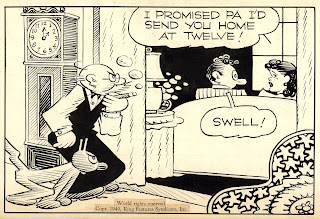 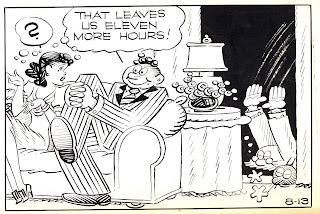 No, I don't own a Cliff Sterrett original (don't I wish)! This piece from my collection is by Paul Fung, one of my favorite of the classic comics ghost artists. Fung went on to draw BLONDIE comic books for years, quite beautifully I think. Yet another piece of inexhaustible inspiration, for me.
Posted by sdestefano at 9:18 PM 3 comments: 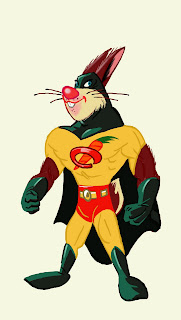 Yeah. I digitally painted Captain Carrot. So what?
It's my time. And the character's making something of a comeback at DC these days.
And I like to draw funny animals. I've drawn all sorts of funny stuff at DC, but
never Captain Carrot. Or his Zoo Crew.
I felt like taking a couple of hours to draw in Photoshop.
So?
And my girlfriend's not here.
So?
Posted by sdestefano at 8:32 PM 6 comments: 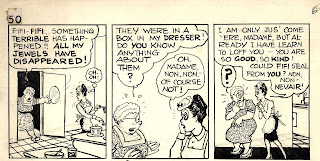 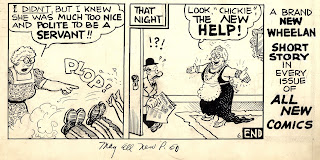 Gosh, but I like his stuff.
Bits and pieces of a scan of an original I own.
Very corny, but very inspiring.
Posted by sdestefano at 8:29 PM 2 comments: