PLASTIC MAN will appear in DC's hardcover collection of their popular WEDNESDAY COMICS, in a strip written by Evan Dorkin and drawn by myself. Editor Mark Chiarello intended to use the strip if one of the regular artists on the project had trouble meeting the weekly deadline, but I'm guessing all of the folks he worked with were punctual, because it wasn't published. Thankfully, this strip is seeing the light of day now, which makes me happy because I think it's good. I got my complimentary copies of the book from DC yesterday, and it's a damned spiffy package.
Here's a little sneak peak of it, with colors by the editor himself, and lettering by Siobhan DeStefano herself----I mucked up the word balloons, I think, they're the only thing I don't like about the strip. Apparently, this should hit stores the first week in June!

**Actually, now that I think of it, I should give some credit to Andy Suriano as well---that's his design of Plas I'm using there. I vowed never again to try and draw like Jack Cole, cuz it's stupid to follow in the tracks of a genius, because your work will always end up looking second rate. I used to swear that one day I'd draw Plas in his 1960's/Jack Sparling/Gil Kane/Win Mortimer style, but I may have given up on that dream, I dunno.
Posted by sdestefano at 5:06 AM 15 comments:

so onto LUCKY IN LOVE, BOOK TWO

Book one of LUCKY IN LOVE is with Kim and his designers at Fantagraphics. They're good people. They're nice to me.
Looks like the book will be out in time for San Diego. If you're going to the convention, check in at the FB booth at some point. Likely I'll be there, either on Friday or Saturday. (Also, I may be on a Cartoon Network panel, for the show I'm currently working on, although I'm not sure I'm allowed to speak too much about that right now.)
I've started drawing book two, LUCKY IN LOVE: LUCKY FOR LIFE. I've done a dozen or so pages of layouts, but took a break from storytelling today to do a little character designing. Check it out, yo. 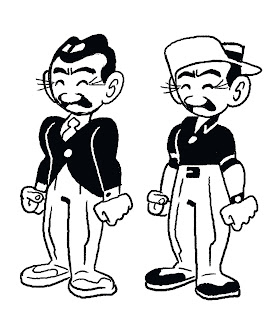 Book two may not have drawings as dynamic looking as the ones in book one, but that's because George and I will be telling a different kind of story in the second volume. But it'll be just as good, if not better.
Posted by sdestefano at 8:00 AM 2 comments: