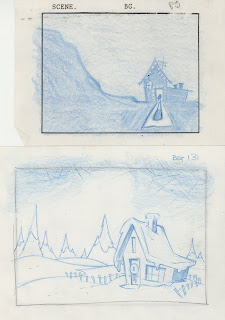 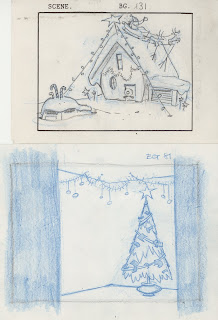 I began my career on the REN AND STIMPY SHOW as a background designer, and one of the earliest episodes I worked on in that position was STIMPY'S FIRST FART (was it actually aired on Nickelodeon as SON OF STIMPY? I forget.) John K. had requested I do a whole slew of drawings that had an old fashioned holiday feeling, based on the storyboard. My attempts are shown above. John wasn't happy with them, and years later, I can understand why. While they're moderately competent cartoon drawings, they have no real direction, or feeling. I recall John, in his inimitably annoyed fashion, telling me, "Look at that tree. It's like you just had a pile of crap in your hands and chucked it at a Christmas tree. There's no design, there's just a load of crap.Whatever stuck to it you let stay that way. Is that how you decorate a tree?" 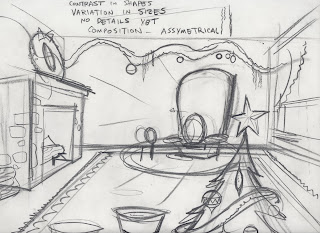 I'm embarrassed to say that I can't recall who drew this for me, Jim Smith or John K. himself. Either way, it's clearly superior (intended as a BG tutorial) to what I'd been drawing. All elements direct the eye towards the characters in the composition. Shapes are bold, and work (for the most part) according to the rules of perspective. There's a lush, organic feeling to it, indicating a very homey and traditional holiday. And note the pail of water towards the bottom. I do recall Jim Smith telling me to always skew shapes slightly, so that they were not functional, but appearing to be functional. This keeps your drawing interesting, without calling too much attention to your shapes. Although both John and Jim attempted to teach me with this and similar drawings, it took me quite a while to internalize the lesson. For years afterwards, I mainly drew pointy, whacky shapes and tried to pass them off as REN AND STIMPY art.
Posted by sdestefano at 7:23 AM

I'd say that was done by Jim Smith. It seems like his pencil lines - confident! Plus the writing isn't like John's stylized lettering.

Yeah, that sounds right, Chris. That explains why I remember Jim speaking about the shape of the pail. Thanks!

I love stories like this- ones that show the rough early days of artists in the industry.

You have a great blog! I'm liking everything I'm reading here.

Thanks Brian, appreciate your thoughts.

Thanks for the insight! Son of Stimpy is a tradition at our house - no Charlie Brown here.

Ah, our first show together. If John picked on your drawings, I'm surprised he didn't take a big shit right on mine.


I've been checking in on your Killraven tribute page for a while now, glad to see you're back to posting. Glad to hear you're busy too.

(Sorry I don't have an avatar.)

Hi Stephen, I came across your blog when looking for background art examples. Your work is brillant! Also you share the same last name as me! :) anyway just wanted to say your work is awesome! The style and imagination.